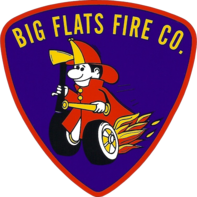 The Town of Big Flats is located on the western border of Chemung County in the Southern Tier region of New York State. It is roughly midway between the cities of Corning and Elmira. It is comprised of a bit more than 46 square miles and Big Flats Volunteer Fire Department serves more than half of the Town. The balance is served by three other volunteer fire departments.

We are primarily a volunteer department but have two paid EMT/driver on duty 24 hours/day. Of our 20 plus members, nearly 15 are qualified, active responders. A few of our responders are also New York State Certified EMT's or Medical First Responders.

We respond an average of twice per day to fire/rescue and medical emergencies in our district, which is about 25 square miles made up of a mixture of village and suburban residential, (about 2,000 homes) rural, wildland interface, light industrial, including a new and rapidly growing industrial park, the largest shopping center in the region, and a commercial airport. Our district has both hydrant and non-hydrant areas.

As our community’s name implies, we are situated in a broad valley bordered on the north and south by high wooded hills and split by an interstate highway (I-86), the Norfolk-Southern Railroad and the Chemung River, which has a bad habit of flooding occasionally. We respond to all aircraft emergencies on a multi-department airport task force, as a back-up for the Elmira-Corning Regional Airport’s two aircraft crash-fire-rescue trucks and mini-pumper. Anything that can travel on wheels or wings goes through or over our district. As you can imagine, what we might lack in volume of calls, we make up for with variety. There are 20 volunteer fire departments and one paid department in Chemung County and we have a terrific mutual aid system. We routinely run mutual aid with about a half dozen departments in Chemung and Steuben counties.

We are active in our community through sponsorship of Little League Baseball and Cinderella Softball teams.

In 2021, Big Flats Fire Department will proudly celebrated its 95th anniversary of service to our community.

For non-emergencies call the fire  station